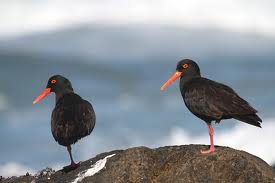 The African black oystercatcher has been teetering on the brink of the endangered list for a number of years. The 6000 or so birds left are found only along the coasts of South Africa and Namibia, although the birds have occasionally been spotted as far north as Mozambique and Angola.

Easy to identify, the African black oystercatcher has entirely black plumage, bright red legs, and a strong, broad red bill used for prying open mussels and limpets.  Their eyes are also red, circled with orange.  It’s not very easy to differentiate the males from the females, but a close look reveals a longer bill and slightly larger bodies on the females.

Both males and females have very loud distinctive calls.

It hardly seems surprising that their numbers have dwindled, as their nest building skills are not the finest.  “Built” on sand on rocks, they are barely a scrape in the ground. Some will go to the effort of placing shells around their eggs, but even so, they are completely exposed to predators and the natural elements.

Oystercatchers mate for life, with some pairs having been known to stay together for 20 years.  Females lay between one and three eggs at a time, although commonly they will lay two eggs, which are incubated by both adults during the breeding season from October to March. This is a particularly vulnerable time, as it is when the beaches are at their busiest, increasing the already high risk of eggs being destroyed. If they survive, the eggs hatch after about 32 days.

The chicks have grey mottled downy feathers and brown-orange legs.  They will begin to fly after about 45 days, and eventually after four years will themselves begin to mate.

Some life-saving human intervention and a drive to create awareness, called the Oystercatcher Conservation Programme, have managed to keep this vulnerable bird species on the ‘near threatened’ list, and with slowly increasing numbers, hopefully even this may no longer be necessary.