The Khoisan people originally inhabited the area until Dutch Settlers arrived in the 17th century. Knysna’s documented history began in 1804 with the arrival of George Rex, rumored to be the illegitimate son of King George III who subsequently opened shops, established a port and a timber business that exported hardwoods around the world.

The Thesen family moved from Norway to Knysna in 1870 and founded numerous business entities in the town, and in 1904 Charles William Thesen bought Paarden Island (now named Thesen Islands) and began processing timber on the Islands in 1922. Wood waste from the timber mill was subsequently used to start a power station which generated electricity from turbines and this eventually supplied the towns of Knysna and Plettenberg Bay with electricity until the mid 1970’s.

The various structures were relocated around the island, often without documented plans, and were part of the Eskom power grid for many years. The current power station site, which now hosts the Turbine Boutique Hotel & Spa and Island Café, was built in 1939/1940.

A large industrial conglomerate, Barlows, purchased the logging operations on the Island in 1974 but these were decommissioned in early 1980 due to the adverse environment impact they caused. They subsequently sold on their site for re-development and CMAI went on to develop the Islands into the internationally acclaimed marina development it is today, housing the Thesen Harbor Town with its shops, restaurants and hotels, together with 596 residential houses and apartments, 19 interlinked islands and numerous canals.

The last day of operation of the power station was 26 June 2001. A museum concept never materialized and the site was sold to the current Hotel owner and operators, Geoff Engel and Dandre Lerm, in September 2007. Rezoning, approvals and building of the site took almost 3 years and the full operation commenced trading on 12 August 2010. 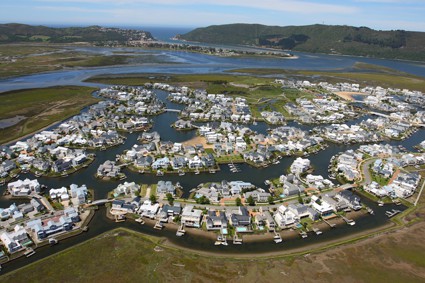 The Turbine Boutique Hotel and Spa comprises 26 rooms and suites, the Turbine Spa, the 90-seater Island Café, the Gastro Pub, together with conference facilities, pool deck, jetty for motorised pontoon cruises and a host of modern facilities, which tastefully complement the refurbished facilities and equipment brought back to life around the property, giving it status as one of the top hotels in Knysna.

The original wood boiler, four electricity generators and much of the equipment have been fully restored and blend in with the hotel’s décor themes. Each bedroom has been individually decorated and is themed and named to reflect the rich cultural, historical and geographic diversity of Knysna.

The hotel stands out among other hotels in Knysna as it is a living testimony to the past of this unique operation and site. Once again it resumes its place as part of the Thesen Islands and Knysna community, as a heritage site and haven for both locals to drop in and for tourists passing through this extraordinary destination.

This website uses cookies to improve your experience while you navigate through the website. Out of these, the cookies that are categorized as necessary are stored on your browser as they are essential for the working of basic functionalities of the website. We also use third-party cookies that help us analyze and understand how you use this website. These cookies will be stored in your browser only with your consent. You also have the option to opt-out of these cookies. But opting out of some of these cookies may affect your browsing experience.
Necessary Always Enabled
Necessary cookies are absolutely essential for the website to function properly. These cookies ensure basic functionalities and security features of the website, anonymously.
Functional
Functional cookies help to perform certain functionalities like sharing the content of the website on social media platforms, collect feedbacks, and other third-party features.
Performance
Performance cookies are used to understand and analyze the key performance indexes of the website which helps in delivering a better user experience for the visitors.
Analytics
Analytical cookies are used to understand how visitors interact with the website. These cookies help provide information on metrics the number of visitors, bounce rate, traffic source, etc.
Advertisement
Advertisement cookies are used to provide visitors with relevant ads and marketing campaigns. These cookies track visitors across websites and collect information to provide customized ads.
Others
Other uncategorized cookies are those that are being analyzed and have not been classified into a category as yet.
SAVE & ACCEPT